It is late night on a Saturday and the floor is packed. On one side, two female fashion models huddle together, whispering. Across the room, a group of men cast furtive glances at other patrons from a raised platform.

Quiet, please. This is no dance club. That is so Hong Kong. So New York.
In Taipei, Taiwan, the cool people are at the Esilite Bookstore on Dunhua South Road, open 24 hours a day.

Lena Lin, 28, is one of the models. She is sitting on the floor, reading a translation of Sheryl Sandberg’s “Lean In.” Next to her is her friend Esther Yang, 27, skimming through a Chinese version of “Notes on Directing” by Frank Hauser and Russell Reich. The bookstore has a longstanding policy: Stay as long as you like, read as much as you want, just don’t spill coffee on the books. Catnaps are fine. No purchase necessary.

But purchase they do. At a time when many bookstores in the United States are struggling in the face of an onslaught from the online retailer Amazon, Eslite is thriving. It has 43 stores in Taiwan and one in Hong Kong. The company has plans to open two branches in mainland China this year, in Shanghai and Suzhou. Sales rose more than 15 percent in 2013 in its listed arm, and profits are rising as well.

One secret to Eslite’s success is that it is far more than a bookstore. While the Borders chain, now defunct, in the United States featured coffee shops, Eslite stores are more like self-contained shopping malls. About 60 percent of sales come from books. The rest comes from items like food, kitchenware, music, wine, jewelry, watches, movies, toys — sold in shops interspersed throughout the bookstores. One branch in Taipei has a movie theater. 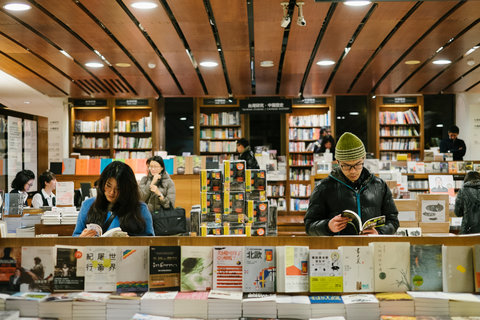 Another reason for its success is the character of the city where the company was founded in 1989. As in many Asian cities, people work late into the night, and a company survey in 1999 suggested that many people would frequent a 24-hour bookstore. The busiest time for the bookstore is between 10 p.m. and 2 a.m., according to Timothy Wang, a company spokesman.

At 11 p.m., the checkout line was about 20 people deep. By that time, Ms. Lin and Ms. Yang had already been at Eslite for four hours. They started with dinner in the bookstore’s food court, bought a calendar, then went upstairs to read.

“People in Taiwan, particularly in Taipei, are really calm. They really like to read books,” Ms. Yang said. “This is entertainment for us.”