Redundant in July, first book out October: Upstart Press is all action

The book trade was stunned when long serving Hachette NZ CEO Kevin Chapman was made redundant as the company pulled out of local publishing in mid 2013. Hachette’s local publishing, especially its sports titles, had been an important part of bookstores’ Father’s Day and Christmas offerings for many years.

Patricia Chapman had just registered a new company earlier in the year, so gossip had it that they had been forewarned; not so – Pat was setting up the company for her own project as publisher of Michael Bassett’s City of Sails, his 1989-2010 history of Auckland City Council.

That company was Hapimana Press … ‘Hapimana’ being the Maori transliteration of Chapman. That name was their first thought for the new imprint, but it was soon realised that having to constantly explain the name was unworkable.

cheeky cup-design logo. Kevin was also aware that the Moa sports book imprint had no legal restrictions, and recreated that as the company’s sports book imprint, albeit with a twist: Moa is now Mower and the icon is that every Kiwi home necessity – a lawnmower!

The New Invincibles: How the 2013 All Blacks Created History by Ron Palenski was Upstart’s first publication, a large format with full colour pictures at an affordable cost for last year’s Christmas market.It should be noted at this point that Kevin initially had no plans for staying in publishing and was looking to transfer his corporate skills into other business areas. But a procession of authors looking for a new publisher knocked on his door and he changed his mind. One was Joy Cowley and though he was going to publish her Buzzy Bee books as a sideline project, this along with the other avenues opening up convinced him to stay in publishing.Next it was a huge effort to get premises organised. “I even got an office for Warren Adler though he hadn’t replied to my offer to join Upstart,” Kevin says. The multi office set up with central area and conference room meant the PANZ office could be housed as a tenant, and another business also works from their office suite.Very quickly the 2014 list grew to 14 titles – three children’s picture flats, two novels, eight non-fiction titles including five on sports, and one calendar.Upstart found Kiwi booksellers supportive says Kevin. “They told me they needed someone to do those big sports books the public loved and which they enjoyed selling.” He and Pat attended the Paper Plus conference in Taupo earlier this year and were really heartened by the positive response from booksellers on keeping their sort of books alive in the market.

“Do you know that Paper Plus Motueka actually hired a helicopter to fly in Robbie Deans for a special promotion?” says Pat. “It really brought home to me how appreciated our rugby books are in this country.” 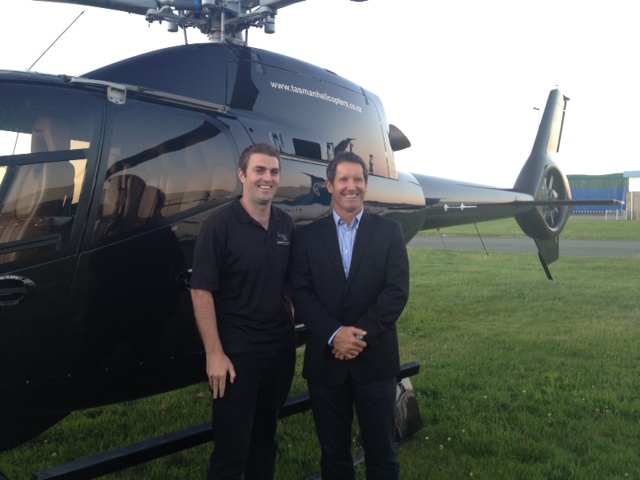 Robbie Deans pictured above right with pilot from Tasman Helicopters Private Tours
“We have also been lucky to have Archetype as our sales team” says Kevin. “They are highly respected and hugely knowledgeable”.Start-ups (no pun intended) of businesses, especially new ones in the publishing field, are notoriously hard to get underway. Despite what many would regard as a successful first year, Upstart’s owners have been financially prudent to get the company on a firm footing.That has obviously been achieved, because there is a 22 title publishing program in place for 2015, and projects being generated for 2016. Next year’s list will have a few more children’s titles, another two novels, humour, biography and memoir.The workplace is fun – publisher Warren Adler has the ‘title’ of Chief Technology Officer because he is not especially technical. Designer Craig Violich (who freelances out of the Upstart offices) is Chief Proof Reader – because he’s dyslexic.Their newest employee is Ebony Sparrow who will take care of distribution and assist Pat with administration and customer service. She is starting with a ceo title – Customer Empowerment Officer.In all other respects, Upstart is highly professional. For instance, Upstart Press has its eyes on overseas markets. Post Frankfurt Book Fair last month, Kevin detoured to London to meet with publishers there, and followed up with American visits to Upstart’s representatives in that market, Trafalgar Square, and with colleague publishers Andrews McMeel.Golf clubs were involved in those travels – Kevin is known to have a set of clubs stashed in at least three golf destinations around the world – but there may be some gear for sale shortly, as his new sports interests are cycling and stand up paddle boarding.

Upstart is also having success with e-versions of their titles, distributed by Faber Factory.

They may not have a cookbook in their range, but you could rightly call Upstart Press New Zealand’s most iconic publisher: there’s no topping Buzzy Bee and rugby!

PS: PANZ News reporter was unwise to use the old fashioned term and asked for ‘mugshots’ of Pat and Kevin. We acknowledge their receipt: